The No. 10 Konica Minolta team has four wins in their eight years of competing at the 2.35-mile, 14-turn street circuit with their most recent victory in 2017 with Ricky Taylor behind the wheel. Taylor’s success at the track includes three wins and five top-five finishes. 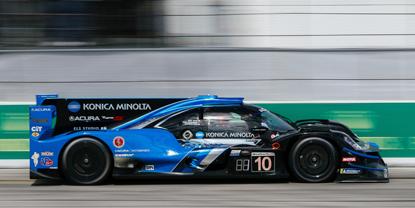 The current 2021 IMSA WeatherTech Sports Car Championship leaders will compete at Raceway at Belle Isle Park in Detroit, Michigan this weekend for the Chevrolet Sports Car Classic. After a thrilling victory at Mid-Ohio Sports Car Course last month that saw the team extend their championship, Ricky Taylor and Filipe Albuquerque will pilot the No. 10 Konica Minolta Acura ARX-05 for a one-hour and 40-minute sprint race.

The No. 10 Konica Minolta team has four wins in their eight years of competing at the 2.35-mile, 14-turn street circuit with their most recent victory in 2017 with Ricky Taylor behind the wheel. Taylor’s success at the track includes three wins and five top-five finishes.

“This will be my third year at Detroit with the Acura ARX-05 but the first with WTR running one,” said Ricky Taylor. “Between the relatively smooth first and second sectors and the very bumpy and unforgiving third sector it can be very difficult to nail the car setup at this racetrack. However, the team has done a lot of homework since Mid-Ohio to make sure we are as prepared as possible.  WTR has a great history of racing in Detroit, but for the first time it’s not going to feel like being on home turf. It’s the home of the Cadillacs here and we get to play as the away team a bit, which makes it fun as well.”

This will be Filipe Albuquerque’s third attempt at the Detroit Grand Prix. He has not won at the historically difficult track but enjoys the challenge that the streets of Belle Isle create while racing.

“We have been preparing for the Detroit Grand Prix at Belle Isle,” commented Filipe Albuquerque. “It’s one of the most challenging tracks that I have ever driven in my life, and I really enjoy racing there. This year the championship is very close between anyone, so I think it’s possible for anyone to win the race. Although I don’t think Detroit is the best suited track for our car, but we will do our best. Strategy is a big role, and anything can happen.”

“I always love coming to Detroit, the big Motor City,” mentioned Wayne Taylor. “We’ve had a lot of success there. This is the first time we’re going there as an Acura, so we are a little in the dark. But we feel that we’re getting to know the car well and every race we’re making it faster. The one thing about Detroit is that it’s all about track position, so it’s ideal to start it on pole. The other advantage we have is that we have the last pit since we’re leading the championship. It’s still a very tough and demanding track where a slight mistake can take you out of the race. We’ve really honed it in on the drivers that this is one of those races where you must finish. We’re looking forward to it and hoping we can add another Detroit win.”

Practice for the Chevrolet Sports Car Classic begins Friday, June 11th at 8:00 a.m. ET with qualifying following at 3:30 p.m. ET. Green flag for the second sprint race of the season will wave at 5:10 p.m. ET on Saturday, June 12th, with live broadcast coverage beginning at 5:00 p.m. ET on NBC.

About Konica Minolta Konica Minolta Business Solutions U.S.A., Inc. is reshaping and revolutionizing the Workplace of the Future. The company guides and supports its customers’ digital transformation through its expansive office technology portfolio, including IT Services (All Covered), content services, managed print services and industrial and commercial print solutions. Konica Minolta has been included on CRN’s MSP 500 list nine times and The World Technology Awards recently named the company a finalist in the IT Software category. Konica Minolta has been recognized as the #1 Brand for Customer Loyalty in the MFP Office Copier Market by Brand Keys for fourteen consecutive years, and received Keypoint Intelligence’s BLI 2021 A3 Line of The Year Award and BLI 2021-2023 Most Color Consistent A3 Brand Award for its bizhub i-Series. Konica Minolta, Inc. has been named to the Dow Jones Sustainability World Index for nine consecutive years and has spent four years on the Global 100 Most Sustainable Corporations in the World list. Konica Minolta partners with its clients to give shape to ideas and works to bring value to our society. For more information, please visit us online and follow Konica Minolta on Facebook, YouTube, LinkedIn and Twitter. Wayne Taylor Racing’s existing lineup of partners that also features Harrison Contracting, Acura Motorsports , Hammer Nutrition  and CIT.