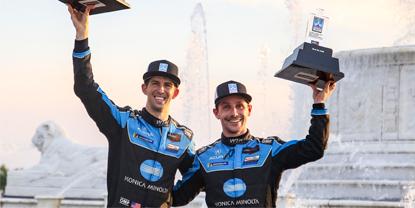 Ricky Taylor started the race in fourth position on the second row. After falling back a position at the start, he showed an improved pace towards the end of his stint. On a weekend where Cadillacs were fastest in every session, he closed the gap to fourth with a display of aggressive maneuvering before pulling in for the team’s sole pitstop.

With 43 minutes to go, Filipe Albuquerque took the helm. Thanks to quick work by the team, he jumped past two cars in the pit cycle. A hard-fought battle for third ensued with only 20 minutes left on the clock, but Filipe defended bravely from faster cars behind. Despite a late caution, he held off the charge at the restart and brought home a fantastic podium for Wayne Taylor Racing.

“This was a fantastic day for everyone at the No. 10 Konica Minolta team,” exclaimed Ricky Taylor post-race. “Today was a damage control day that turned into, actually, a very good points day. Third place was like a win for us. The Cadillacs were extremely strong. Filipe did an outstanding job to hold the third spot while battling some technical issues and this was just a great day. We’ll go on to Watkins Glen, which should come back more in our favor, and continue pursuing this championship.”

“Well, it was a hard race for us,” Filipe Albuquerque reflected after exiting the car. “We knew that we were not, maybe, the quickest, but we pulled out third place. We had a little issue with our car halfway through the stint, so I had to start defending my position in P3. Great strategy and great start from Ricky in the beginning. We managed to hold P3. Closing a lot were our opponents, especially our closest contender in the championship, which is the Mazda. And today we came out with the P3, but it felt like a win because we know we know we are not going to win all of them, but a podium at a track that is not our best--we are really, really happy about it. Bring on Watkins Glen which is a track that suits our car better, and let’s try and grab a win!”

“Yet again, the guys at HPD, Konica Minolta, Harrison Contracting, CIT, and this team were just amazing,” said team owner Wayne Taylor. “HPD made wonders. We had an engine issue with 20 minutes to go, the drivers were awesome, and it was a good finishing position for us for the points.”

The 2021 IMSA WeatherTech SportsCar Championship returns to action June 24-27 for the Sahlen’s Six Hours of the Glen at Watkins Glen International where the No. 10 Konica Minolta Acura ARX-05 team will look to extend their championship lead even further.

Konica Minolta Business Solutions U.S.A., Inc. is reshaping and revolutionizing the Workplace of the Future. The company guides and supports its customers’ digital transformation through its expansive office technology portfolio, including IT Services (All Covered), content services, managed print services and industrial and commercial print solutions. Konica Minolta has been included on CRN’s MSP 500 list nine times and The World Technology Awards recently named the company a finalist in the IT Software category. Konica Minolta has been recognized as the #1 Brand for Customer Loyalty in the MFP Office Copier Market by Brand Keys for fourteen consecutive years, and received Keypoint Intelligence’s BLI 2021 A3 Line of The Year Award and BLI 2021-2023 Most Color Consistent A3 Brand Award for its bizhub i-Series. Konica Minolta, Inc. has been named to the Dow Jones Sustainability World Index for nine consecutive years and has spent four years on the Global 100 Most Sustainable Corporations in the World list. Konica Minolta partners with its clients to give shape to ideas and works to bring value to our society. For more information, please visit us online and follow Konica Minolta on Facebook, YouTube, LinkedIn and Twitter. Wayne Taylor Racing’s existing lineup of partners that also features Harrison Contracting, Acura Motorsports , Hammer Nutrition  and CIT.