In their seven trips to Long Beach, the team has three victories, five podiums, two poles and have led 183 laps. Ricky Taylor has scored his three wins (2015-17) at the circuit while previously driving with Wayne Taylor Racing, most recently he finished second in 2019, which is Acura’s best finish at the street circuit. 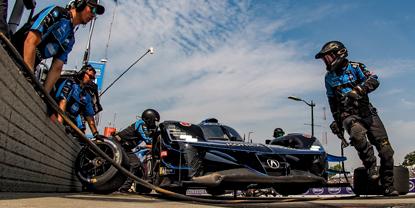 In their seven trips to Long Beach, the team has three victories, five podiums, two poles and have led 183 laps. Ricky Taylor has scored his three wins (2015-17) at the circuit while previously driving with Wayne Taylor Racing, most recently he finished second in 2019, which is Acura’s best finish at the street circuit.

“Long Beach is a big home race for Acura and over the past two attempts, victory has eluded us,” said the two-time IMSA WeatherTech SportsCar Champion Ricky Taylor. “The circuit has been dominated by Cadillac. With only two races remaining in our season, a win would not only be sweet for victory on Acura’s home soil but also take the pressure off us going into the Petit Le Mans endurance race in November. We finally flipped the momentum mid-season and are back to winning. It feels good to be back on the right side of it, but we need to keep our heads down because we still have a big target on our backs.”

With a 100% success rate along the streets of Long Beach, Filipe Albuquerque enters the weekend with two previous wins from 2018 and 2019. The Portuguese driver will look to secure another victory at the historic circuit and the first for Acura.

“I’m definitely very pumped because it’s such a very special event and track,” commented Filipe Albuquerque. “The momentum coming from a win at Laguna Seca helps our whole team. We need to continue the good work; the job is not done yet and we still have two races to go. Long Beach is the home of Acura, so we all want to do well. We are going to give our best. The pressure is more on the other side than our side. We had the pressure that we needed to win at Laguna and now they have the pressure to win in Long Beach.”

“Going into Laguna we couldn’t really get ourselves into the points situation because when we’ve been leading for so long and the points gap was getting narrower and narrower, we needed to focus on one race at time,” said team owner Wayne Taylor. “We did that at Laguna where Filipe got the pole, Ricky finished the race and we won. It really helped us. Now as we head to Long Beach it will be difficult because the Cadillacs has quite a bit of an edge. Like my team always done, they always pull something out. I’m relying on all of them and it’s a win-win, we have to win.”

Konica Minolta Business Solutions U.S.A., Inc. is reshaping and revolutionizing the Workplace of the Future™. The company guides and supports its clients’ digital transformation through its expansive office technology portfolio, including IT Services (All Covered), intelligent information management, managed print services and industrial and commercial print solutions. Konica Minolta has been included on CRN’s MSP 500 list nine times and The World Technology Awards recently named the company a finalist in the IT Software category. Konica Minolta has been recognized as the #1 Brand for Customer Loyalty in the MFP Office Copier Market by Brand Keys for fourteen consecutive years, and received Keypoint Intelligence’s BLI 2021 A3 Line of The Year Award and BLI 2021-2023 Most Color Consistent A3 Brand Award for its bizhub i-Series. Konica Minolta, Inc. has been named to the Dow Jones Sustainability World Index for nine consecutive years and has spent four years on the Global 100 Most Sustainable Corporations in the World list. Konica Minolta partners with its clients to give shape to ideas and works to bring value to our society. For more information, please visit us online and follow Konica Minolta on Facebook, YouTube, LinkedIn and Twitter. Wayne Taylor Racing’s existing lineup of partners that also features Harrison Contracting, Acura Motorsports, Hammer Nutrition  and CIT.