Full-time co-drivers Renger van der Zande and Ryan Briscoe will be joined by accomplished motorsports veterans Scott Dixon and Kamui Kobayashi aboard the No. 10 Konica Minolta Cadillac DPi-V.R at the historic 3.56-mile, 12-turn road course, as they race twice around the clock starting Saturday afternoon at 1:40 pm EST. 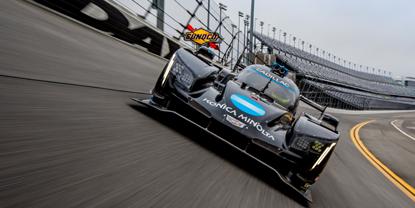 The No. 10 Konica Minolta Cadillac DPi-V.R team returns to Daytona International Speedway as defending champions for the 58th Rolex 24 at DAYTONA this weekend. Full-time co-drivers Renger van der Zande and Ryan Briscoe will be joined by accomplished motorsports veterans Scott Dixon and Kamui Kobayashi aboard the No. 10 Konica Minolta Cadillac DPi-V.R at the historic 3.56-mile, 12-turn road course, as they race twice around the clock starting Saturday afternoon at 1:40 pm EST.

“Going to the Rolex 24 is obviously a big deal,” said van der Zande who will compete in his seventh Rolex 24 at DAYTONA this weekend. “Our No. 10 Konica Minolta Cadillac DPi-V.R team has been so successful year in and year out. For me, Daytona is such a special place because it’s nice to return to a track where you have already won. All the elements that need to be there to win this race are there, so it’s all about executing them at the right moment. There’s always a factor of luck in 24-hour races, but I have full confidence in the team along with Ryan, Scott and Kamui for this race. It’s a big event for our sponsors and partners, Konica Minolta, CIT and AMETEK who have been so supportive. I’m very excited for the weekend.”

“I’m really looking forward to our first race of the 2020 season and our biggest of the year,” said Ryan Briscoe who has two GTLM-category victories at the 24-hour endurance race (2015, 2018). “The No. 10 Konica Minolta Cadillac DPi-V.R team is the best in the business and I have an incredible lineup of teammates to fall back on and learn from. Wayne and Max know what it takes to win this race, both as drivers and as team owners, and I hope to contribute to their winning tradition at the Rolex 24.”

“I’m really looking forward to the Rolex 24 of DAYTONA,” said Scott Dixon the 39-year-old from New Zealand. “We were really great at the Roar Before the 24 test and we accomplished a lot, so it should be a really interesting to see how we shape up during the race. The crew and team have been a lot of fun to work with so far and I’ve really enjoyed teaming up with Ryan, Renger and Kamui. We all have one goal in mind and that’s to try and go back-to-back for Wayne and the whole No. 10 Konica Minolta Cadilac DPi-V.R crew.”

2019 Rolex 24 at DAYTONA winner, Kamui Kobayashi, returns to the No. 10 Konica Minolta Cadillac DPi-V.R. for the second year in a row as a support driver for the team's Rolex 24 effort. The Japanese motorsports veteran is known as one of the most versatile drivers having competed in F1, the FIA World Endurance Championship and Formula E. He was highly instrumental in the team’s 2019 victory by keeping the team in the lead for 72 of the 87 laps he drove.

“As a team, the No. 10 Konica Minolta Cadillac DPi-V.R had a very productive test at the Roar Before the 24,” said Kobayashi the current Le Mans lap record holder and has placed second at the 24 Hours of Le Mans in 2016, 2018 and 2019. “Working with Renger, Ryan and Scott has been fantastic, I feel very confident with the team and drivers. I was also happy with the car throughout the test weekend, so I have a very good feeling going into this weekend that we will have a strong race.”

Entering their 14th year as team owners, Wayne Taylor and Max Angelelli have led the No. 10 Konica Minolta Cadillac DPi-V.R team to become a consistent powerhouse at the Rolex 24 at DAYTONA and the IMSA WeatherTech SportsCar Championship.

“Obviously the No. 10 Konica Minolta Cadillac DPi-V.R team is looking forward to the Rolex 24 at DAYTONA,” said team owner Wayne Taylor. “It’s going to be the first time in 12 years that I won’t have one of my sons driving for me, but I’m excited about our driver lineup with Ryan Briscoe, Renger van der Zande, Kamui Kobayashi and Scott Dixon. Based on what we saw at the Roar Before the Rolex 24, I feel this will probably be one of the most competitive Daytona 24 Hour races. With the new IMSA leadership in place I feel very confident that the series is going to grow and I’m positive that we have a strong leader [John Doonan] who understands every aspect of the sport. We have a big group coming to the race from Konica Minolta, CIT Bank, AMETEK and Cadillac. With Daytona being our family's home track, we also have lots of friends on site. Though the weather doesn’t look great, we won last year in bad conditions, so the rain can be a great equalizer.”

Practice for the 58th Rolex 24 at DAYTONA beings Thursday morning with DPi-class qualifying set for 5:05 p.m. ET. The green flag will wave at 1:35 p.m. EST on Saturday with live coverage beginning at 1:30 p.m. ET on NBC. The entire 24-hour race will be available on TrackPass on NBC Sports Gold.