The No. 10 Konica Minolta Cadillac DPi-V.R race team, and defending 2019 Rolex 24 at DAYTONA race winners, ring in the new decade and the 2020 IMSA WeatherTech SportsCar Championship season this weekend on the high banks of the 3.65-mile road course of Daytona International Speedway with a new driver line-up of four previous Rolex 24 class winners. 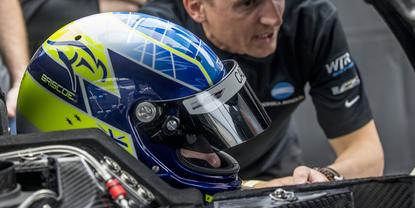 The No. 10 Konica Minolta Cadillac DPi-V.R race team, and the defending 2019 Rolex 24 at DAYTONA race winners, will ring in the new decade and the 2020 IMSA WeatherTech SportsCar Championship (P) season this weekend on the high banks of the 3.65-mile road course of Daytona International Speedway with a new driver line-up of four previous Rolex 24 class winners.

At the annual Roar Before the Rolex 24 test event, January 3-5, Renger van der Zande will climb back aboard the Konica Minolta Cadillac, joined by IndyCar Series and sportscar veteran Ryan Briscoe for the full 10-race season. FIA World Endurance Champion Kamui Kobayashi, who was part of the team’s 2019 victory and five-time Indy Car champion Scott Dixon will round out the duties as the team looks to defend its 2019 title later this month during the historic Rolex 24 at DAYTONA, January 25-26.

“Wayne Taylor Racing has created a fantastic line-up with drivers who all know how to win,” said van der Zande, who secured the Rolex 24 pole for the team in 2018. “Daytona is a special race where a lot can happen. Having just come off a test in Sebring, we are preparing as much as we can. The ROAR is going to be very important to ensure that we feel confident and are with a good mentality when we head straight into the race weekend a few weeks from now.”

Briscoe, the 38-year-old from Australia, joins the team after a four-year run with the Ford Chip Ganassi Racing GT Le Mans-class program where his No. 67 Ford GT scored eight class wins, 18 podium finishes and eight pole positions in 44 races, including a class victory in the 2018 Rolex 24.

“I’m really proud to be a part of the Wayne Taylor Racing organization,” said Briscoe, who last drove with the team in 2008. “We’ve had two days of testing and I’m really happy with how everything went after running a lot of laps with different setup changes. It’s an amazing car and I’m really looking forward to getting back in the No. 10 Konica Minolta Cadillac DPi-V.R. with my teammates this weekend.”

“It’s been a while since I’ve been in a Prototype, so it’s been interesting for me to have the opportunity to drive one and get comfortable,” said Dixon, whose third child was born just a few days prior to the test weekend. “I work great with Ryan as we’ve raced in different formulas together and I’m enjoying being able to work with Renger and Kamui for the first time. Everyone has been so welcoming at Wayne Taylor Racing. It’s like a family and I’m very happy to be part of it!”

2019 Rolex 24 at DAYTONA winner, Kamui Kobayashi, takes a brief break from his extensive driving duties in the FIA World Endurance Championship to return to the No. 10 Konica Minolta Cadillac DPi-V.R. for the second year as a support driver for the race.

“It is really exciting that we have the Roar Before the Rolex 24 approaching this weekend,” said Kobayashi. “I am looking forward to being back in the No. 10 Konica Minolta Cadillac DPi-V.R. for the first time since last year’s victory with the team. I cannot wait to work with my teammates Renger, Ryan and Scott.  It will be a productive test for sure.”

As they enter their 14th year as team owners, Wayne Taylor and his former teammate Max Angelelliare seen as staunch competitors in the endurance racing arena, both as drivers and now owners, with numerous titles in the books: Rolex 24 (4),  12 Hours of Sebring (2), Petit Le Mans (3), 24 Hours of Le Mans (1) as well as eight Manufacturer Championships.

“As the first year without one of my sons in the car, it is a very different lineup,” said Taylor. “We know Renger very well as he has raced with us the past two seasons. I call Ryan my third son as Max and I have managed him since he came to the United States. We are thrilled to have Kamui back and were delighted when Scott became available. I’m excited to see how the drivers will gel and work out the race strategies. I’m also looking forward to having all our partners, Konica Minolta, AMETEK and CIT back again, along with Cadillac and General Motors who I have now been with for over 28 years. The off season has been too long, so I’m really looking forward to this weekend.”

Roar Before the Rolex 24 testing for all IMSA WeatherTech Sportscar Championship teams begins at 11:00 a.m. ET on Friday, January 3rd, with the final test session concluding on Sunday, January 5th, at 3:45 p.m. ET.