With its third podium finish of the season, the team extended its lead in the Championship standings to a total of 124 points, six points clear of the competition. 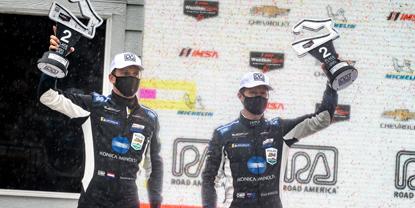 Renger van der Zande, Ryan Briscoe and the No. 10 Konica Minolta Cadillac DPi-V.R team put on a fantastic display amidst treacherous conditions and secured a second place finish at Road America, in round four of the IMSA WeatherTech SportsCar Championship. With its third podium finish of the season, the team extended its lead in the Championship standings to a total of 124 points, six points clear of the competition.

When green flag racing resumed with just seven minutes to go, van der Zande took the lead with a fantastic move past the No. 77 car, which struggled on the wet track, having yet to pit for rain tires. As rain began to fall once more, the No. 7 Acura of Helio Castroneves darted back and forth and then pushed past van der Zande. The team would have to settle for a well-fought second place finish.

“I am ecstatic!” said a proud team owner, Wayne Taylor. “Though we came in second today, it felt like a win! What a day! We are now leading the Championship by 6 points; my oldest son, Ricky and his teammate Helio Castroneves won the race and my other son, Jordan and teammate Antonio Garcia won the GTLM class. It does not get better than this! I cannot thank everyone at Konica Minolta, Cadillac, CIT and AMETEK enough for their continued support and to this special group of people that work for Wayne Taylor Racing. They are amazing.”

“We had a fantastic result.” said Renger van der Zande. “Compared to the Mazdas and Acuras we were not competitive this weekend in the dry conditions, so we needed rain to do better than a fifth-place finish. It was super tricky out there. The car became a boat a few times and I had some big moments. This team has done a fantastic job. We were doing well and were staying in front of the other Cadillac cars, but then I saw some rain drops on the windscreen and I told the team. They made the call to put rain tires on the car even though the track was completely dry. Sometimes you dream about these strategy calls where you put rain tires on the car and then it becomes wet, but today it happened, and we were suddenly leading after the red flag. We can be very happy with leading the championship and coming out with a second-place finish!”

“A P2 for us today was great result,” said Ryan Briscoe. “We lucked out with the weather at the end and had really good timing with the pit stop going to rain tires. Unfortunately, we didn’t have enough to hold off the No. 7 car for the win, but we were really thinking about championship points. Given how we started today, a second-place finish was massive. I’m really pleased with that. I was happy with my drive at the beginning of the race and I thought the car was handling really well while we were holding our own In the front of the Cadillac field. At the end of the day, a really good result and nice way to go in the August break.”