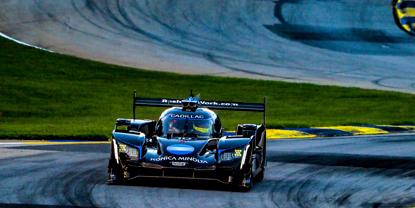 The IMSA WeatherTech SportsCar Championship and Michelin Endurance Cup are set to continue this weekend at Michelin Raceway Road Atlanta with its seventh and third rounds respectively, for the famed Motul Petit Le Mans. Five-time INDYCAR champion Scott Dixon will rejoin Renger van der Zande and Ryan Briscoe in the No. 10 Konica Minolta Cadillac DPi-V.R for the ten-hour battle around the 2.54-mile, 12-turn permanent road course. Dixon, along with former Formula 1 driver and current World Endurance Championship superstar Kamui Kobayashi, was part of the Konica Minolta team’s victory at the iconic Rolex 24 at DAYTONA race earlier this season, where the team won its third Rolex 24 title in four years.

The pilots of the No. 10 Konica Minolta Cadillac DPi-V.R have had great success at Michelin Raceway Road Atlanta. Renger van der Zande has one overall victory with the No. 10 Konica Minolta Cadillac DPi-V.R team from 2018, one additional class win, and four top-three finishes. Ryan Briscoe has two class wins from 2008 and 2013, eight top-five finishes and four podium finishes. Scott Dixon has five top-five finishes and three top-three finishes at the classic endurance event.

“Petit Le Mans is one of the races that I love the most, “said Wayne Taylor, the 1998 Inaugural Petit Le Mans winner. “It’s a track that the No. 10 Konica Minolta Cadillac DPi-V.R team does well at. We have Renger van der Zande and Ryan Briscoe plus Scott Dixon back after our win at Daytona which is going to be very cool. I want to thank Konica Minolta, CIT, AMETEK, and Cadillac for continuing to support us during this season. The championship is getting closer, so the focus is on the overall standings and maximizing the final three races of the season. We just have to concentrate on running a good clean race with good pit stops and driver changes to hopefully end up on the podium or win. The competition is incredibly tight, but I know that we can get this sorted to win the championship.”

Renger van der Zande
“I’m very much looking forward to Petit. We’ve done well there the past few years with one win and a second-place finish. We always do well during the long-distance races and it’s fantastic that we have Scott in the car with us this weekend. We’ve followed him in IndyCar this season where he’s been doing very well and see if he will become another champion next week. Wayne Taylor Racing always finds the stability during the endurance races and know how to win this race. We’ll see how it pans out, it’s a different time of the year, so weather can be a factor too. I wouldn’t mind a bit of rain.”

Ryan Briscoe
“I’m really looking forward to our next race at Rd Atlanta, the 10 hours of Petit Le Mans! We had a strong showing at the last 6-hour race there and we have been working hard to come back even stronger. It will be great to have Scott back on board too! We have 3 races left and we will be pushing hard to extend our championship lead.”

Scott Dixon
“Looking forward to getting back in the Konica Minolta Cadillac DPi-V.R this weekend. They’re still leading the championship which is just the way we left Daytona. The goal is to get maximum points. I’m excited to get back to Atlanta for Petit Le Mans. Hopefully we can have a smooth day and weather is going to be good. Excited to get back racing, we have a couple weeks off in the IndyCar season, so it’s nice to have another race before the IndyCar Series season ends in St. Pete.