With a third podium of the season, the No. 10 Konica Minolta Cadillac team continues to lead the championship with a three-point advantage over the second-place contender, the No. 31 Whelen Engineering Cadillac Team, with three races remaining. 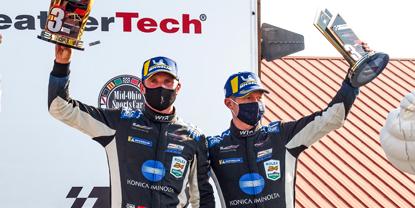 The No. 10 Konica Minolta Cadillac DPi-V.R achieved its first podium in team history at Mid-Ohio Sports Car Course this weekend for Round Six of the 2020 IMSA WeatherTech SportsCar Championship season. With a third podium of the season, the No. 10 Konica Minolta Cadillac team continues to lead the championship with a three-point advantage over the second-place contender, the No. 31 Whelen Engineering Cadillac Team, with three races remaining.

Focused on protecting the Championship first, while eyeing an elusive Mid Ohio podium as well, the No. 10 Konica Minolta Cadillac team entered the weekend with hopes of its best run yet at the flowing natural-terrain road course. The team showed impressive pace early on as Ryan Briscoe placed the Cadillac-powered machine in second place for the final practice session.

The momentum looked to continue into the early Saturday morning qualifying session, with the Australian holding third place for much of the session, until a brief off-track excursion meant the team would ultimately qualify fifth.

At the start of the 2 hour and 40-minute race, Briscoe kept his nose clean while other championship contenders were putting their cars at risk fighting for position. Never putting a foot wrong, Briscoe eventually handed the car over to Renger van der Zande just under the halfway point in fifth place.

From there, van der Zande would put in an impressive display of maturity as other drivers made costly mistakes. After 115 laps at the 2.258-mile, 13-turn road course, van der Zande brought the No. 10 Konica Minolta Cadillac DPi-V.R home in third place, the best finish ever for the team at the picturesque track.

Having executed a near perfect race at one of the most technical tracks on the 2020 IMSA WeatherTech SportsCar Championship calendar, the team looks to continue its momentum as the season winds down.

“What a day for us,” said team owner Wayne Taylor. “We maintained the points lead and the team worked like hell on that strategy to do what we did today. Unfortunately, the tires were so hot that it was difficult for Renger to get out ahead of the 31 car on the last stop. We still got on the podium and I’m so happy. I’m also so happy for my son Ricky, who won overall and for my other son Jordan who won in the GTLM category for Corvette. Truly a great weekend. I can’t say enough about our supporters at Konica Minolta. I’m really looking forward to going to another endurance race.”

“Really good result at Mid-Ohio,” commented Ryan Briscoe. “We weren’t the fastest car out there today, but we had a great strategy and great driving by Renger. We just kept out of trouble and had no mistakes all day long and brought home a good result. Really itching to get another win here, but we need to just keep getting podiums when we can and stay out front in the championship.”

“Today felt like the race of my life,” said Renger van der Zande. “Third place in the end felt like the maximum result here. At the beginning we were losing out in the positions a little bit and we were P5. We got out in front after other cars made mistakes. After I got in, it was survival mode. We improved the car a lot from last year, but there is still some more to come. We’re still leading the championship and made some good points.”

The 2020 IMSA WeatherTech SportsCar Championship continues next month with the famed Motul Petit Le Mans at Michelin Raceway Road Atlanta on October 17th. The ten-hour endurance race is the third of four endurance races in the IMSA Michelin Endurance Cup where the No. 10 Konica Minolta Cadillac DPi-V.R team leads with 23 points. The race will air live on TrackPass on NBC Sports Gold from 10:00 a.m. ET to 10:05 p.m. ET.