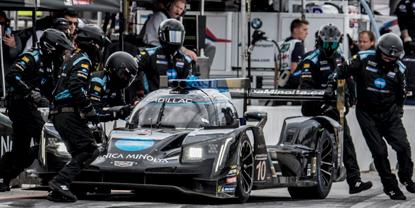 The No. 10 Konica Minolta Cadillac DPi-V.R team enters the weekend at the summit of the IMSA WeatherTech SportsCar Championship standings with a six point lead. Given the team’s form so far in 2020 along with its track record at Michelin Raceway Road Atlanta, the focus will very much be to further strengthen their championship challenge this weekend.

“It’s strange and so pleasant to have another race at Road Atlanta this year,” said team owner Wayne Taylor. “This is a special track for my family and our team has always been fairly competitive here for the long-distance races, so it will be great to see what we can do with the six-hour. I have Ryan and Renger, the same team that won Daytona, a six-point lead in the championship, and fans to cheer us on. I’m excited for the event.”

“Road Atlanta is always an exciting track and one of the most physical ones. So, going there for six hours with two drivers is always a nice challenge and I have been training very hard for this race physically. We’re leading the championship which is great. It’s a small advantage to the competition and it’s better than having no advantage, so it’s a positive point to take into the weekend. I’m looking forward to it. I think we are very well prepared, and we know what to do and how to execute as normally the longer races are what we like.”

“Although I’m really going to miss racing at Watkins Glen, I’m really looking forward to Six Hours at Road Atlanta! The team had a strong result here to finish off the season last year and I fully expect to be in contention for the win this time around. I love the track and can’t wait to get back to racing after our short summer break.”