The No. 10 Konica Minolta Cadillac DPi team continues to lead the 2020 IMSA WeatherTech SportsCar championship standings with a total of 150 points, four points ahead of their nearest rival. 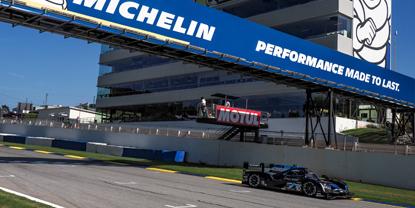 In a six hour battle that was full of controversy, Renger van der Zande, Ryan Briscoe and the No. 10 Konica Minolta Cadillac DPi-V.R team worked exceptionally hard together, leading the most amount of laps (87) on their way to a fifth place finish for the TireRack.com Grand Prix at Michelin Raceway Road Atlanta. The team continues to lead the 2020 IMSA WeatherTech SportsCar championship standings with a total of 150 points, four points ahead of their nearest rival.

With Michelin Raceway Road Atlanta proving to be one of the more technical tracks of the season, the No. 10 Konica Minolta Cadillac DPi-V.R endured a challenging six-hour event thanks in part to Georgia’s intense heat and humidity. Renger van der Zande qualified the car in seventh position, and at the green flag, began working his way through the field all the way to the lead in just 35 minutes. The team consolidated their advantage at the front until lap 71, when a tire puncture interrupted proceedings, causing the team to pit out of sequence.

“I believe the biggest issue for us today was the flat tire,” commented Renger van der Zande. “We were leading for a while and everybody was doing what they needed to do. Strategy wise we had some really good calls, but then we lost a lap and were off sequence because of the flat tire. It’s a shame because we could have scored more points, a win, or even a podium. This is endurance racing though so there’s always something happening. It’s a bit of a casino. Today wasn’t our day, but the team was performing on a very high level and I’m very proud of that.”

The Konica Minolta team was still able to run in the top three until the final thirty minutes of the race, when contact with the No. 6 Acura Team Penske car at the entrance of pit lane saw the No. 10 Konica Minolta Cadillac issued a drive-through penalty. Ryan Briscoe recovered and made up time and positions, with the final outcome proving to be a hard earned fifth position come the checkered flag.

“Awesome race,” said Ryan Briscoe. “I had a lot of fun out there. It was a really good car. Just a really disappointing finish getting the penalty at the end for contact in pit lane with Montoya. It’s been a big discussion. He said he had a problem in his car, and he hit the brakes inside pit lane. We got a penalty for it. It’s a real shame because it ruined our chances for a podium or the win. Disappointing finish, but I’m really proud of the guys. It was hot and grueling. Renger did a great job. I’m really happy with the performance of the team.”

“What a race,” said team owner Wayne Taylor. “The No. 10 Konica Minolta Cadillac DPi-V.R team did an outstanding job today and we clearly would have been second, but for the incident between Montoya and Ryan entering pit lane. I’m disappointed for everybody. Our entire team did such a great job, our drivers, crew, engineers and partners. The pit stops were perfect, and it was almost a perfect race.”

The IMSA WeatherTech SportsCar Championship returns September 25 for the Acura SportsCar Challenge at Mid-Ohio. Coverage will be broadcast live on Trackside on NBC Sports.