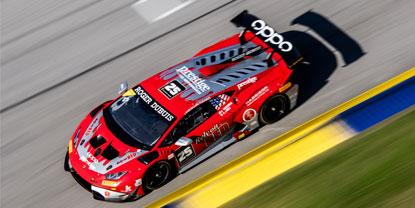 This weekend, Prestige Performance with Wayne Taylor Racing will compete at Sebring International Raceway in Rounds 9 and 10 of the 2020 North America Lamborghini Super Trofeo season.

Competing with seven drivers across three classes in the final event of the 2020 season, the team will be looking to carry on the good form shown at WeatherTech Raceway Laguna Seca where they achieved four podiums along with a first win for Sydney McKee in the LB Cup.

Drivers Stevan McAleer and Stuart Middleton of the No. 1 Prestige Performance Lamborghini Huracán Super Trofeo will continue to compete in the PRO class, while Ashton Harrison and Andrea Amici remain focused on achieving their first win of the season in the PRO|AM class driving the No. 25 Harrison Contracting Lamborghini Super Trofeo. William Hubbell and Eric Curran return to Wayne Taylor Racing in the PRO|AM class to drive the No. 69 Hubbell Racing LST. Sydney McKee once again pilots her No. 87 FaDa Racing Lamborghini Super Trofeo in the LB Cup Class.

The opening race of the North American Lamborghini Super Trofeo series at Sebring International Raceway will begin on Friday, November 13th at 9:05 a.m. ET, with the second race taking place later the same day at 3:40 p.m. ET. All of the race action can be viewed live on IMSA.TV along with event updates available via the Wayne Taylor Racing social media channels.


Stevan McAleer, No. 1 Prestige Performance Lamborghini Huracán Super Trofeo (PRO)
“So, we are four points out of third place which is clearly the goal. The car we are chasing for third place has been very fast all year probably the fastest overall speed so we will certainly have our work cut out, but we found some pace at Laguna Seca so hopefully we can carry the momentum into the final race of the year. Sebring is my favorite track and the chances are slim, but I would love some rain to mix it up. We are eight points out of P2 so mathematically can still catch those guys as well so a lot to play for a lot on the line for Wayne Taylor Racing, Stuart and myself”


Ashton Harrison, No. 25 Harrison Contracting Lamborghini Super Trofeo (PRO|AM)
“I’m looking forward to Sebring and ending the year on a high note. Although it’s unfortunate Andrea and I had some hurdles at Laguna Seca, the year has been very successful, and we’ve learned a lot. Andrea and I have improved at every race and he have been a great teammate. Wayne Taylor Racing has been such a blessing this year and I’m really looking forward ending the season strong and to the 2021 season!”

Andrea Amici, No. 25 Harrison Contracting Lamborghini Huracán Super Trofeo (PRO|AM)
“Nice memories from Sebring where I did my first race with Wayne Taylor Racing in 2015. Hope it will bring the right luck and speed for a great end of the season. Maximum attack for our first win”


Sydney McKee, No 87 FaDa Racing Lamborghini Huracán Super Trofeo (LB Cup)
“I am very excited for the final two rounds of the season at Sebring next week. It is a really tight turnaround from Laguna Seca to Sebring, which makes the race two win at Laguna even more impactful. We are looking to carry that momentum into a successful weekend to wrap up the year. This season has been very unique in many ways and it's crazy to think that it is almost over, but I am hoping to use this final weekend to continue learning and hopefully get another win under my belt!”