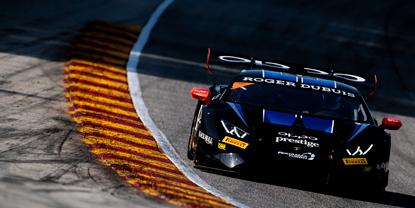 Ashton Harrison and Andrea Amici return to the Wayne Taylor Racing team as co-drivers in the PRO-AM class piloting the No. 25 Harrison Contracting Lamborghini ST.  In 2019, Harrison secured six pole positions, set two track records, ran the fastest laps at eight of 12 LB Cup races, and led the most laps of any other driver in and out of the LB Cup class. At the 2019 Lamborghini season finale weekend in Jerez, Spain, Harrison made history by becoming the first female racer to win a World Finals race.

“Very cool opportunity to be in the No. 1 car this season with Wayne Taylor Racing in Super Trofeo. The last few years I have been working with some of the past WTR drivers at select events coaching and co-driving, but it will be a very different ball game this year as I get a crack at going after the overall Championship with Stuart. The No. 1 Prestige Performance car has always run up front and I look to continue the trend and challenge for wins right out the box”

“I can’t wait to get back racing again, it's been a long layoff with the Covid 19 situation. I'm really thankful to the team to be given this opportunity to race the No.1 Prestige Performance Lamborghini Super Trofeo in the North American Championship,  I’ve got a full year of experience in the Lamborghini Huracan Super Trofeo in Europe and notched up 8 podiums , I can’t wait to get going on some of the fantastic circuits on the calendar. It should be a great season.”

“Andrea and I are looking forward to starting the season off at Road America and being back with Wayne Taylor Racing for another season. I’m really excited to see Andrea because we haven’t seen each other since Jerez last year at the World Finals and we both had great success at that event. I’m also excited to be starting off at a challenging track like Road America where both Andrea and I had great success last year. Our goal is to win PRO-AM races as often as possible and take the PRO|AM Championship. My personal goal Is to become one of the first female Lamborghini champions in the United States. I’m looking forward to seeing everybody, to drive and to be back at our happy place."

“I have good memories from last year’s races at Road America. We won both races and showed a great performance while also getting the lap record. I’m really looking forward to seeing all the team and to breathe the petrol again. I think Ashton and I will have a good partnership for a great season. Our goal is only one: win!”

“I can’t express how excited I am to be headed to Road America in a few short weeks with Wayne Taylor Racing. I am so excited to get back to racing and get back to the paddock with the amazing team and community at WTR. Even though it feels like it took forever to finally make it to the first race, I am thrilled for the coming months filled with incredible events and historic tracks like Road America.”