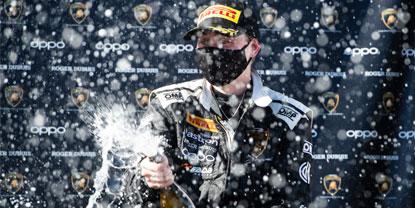 The Prestige Performance with Wayne Taylor Racing team returned to action in the North America Lamborghini Super Trofeo series at the famed WeatherTech Raceway Laguna Seca this weekend. As the 2020 season draws to a close, rounds 7 and 8 of the one-make series made for some fantastic racing at the picturesque road course in northern California, which included a first race win for Syndey McKee.

Prestige Performance with Wayne Taylor Racing were off to a flying start in the first race of the weekend on Saturday afternoon, with Stevan McAleer in a titanic battle for second place in the PRO class after qualifying 3rd earlier in the day. At the halfway point of the race, McAleer brought the car to pit lane for the lone mandatory pit stop and driver change. With Stuart Middleton in the car, the No. 1 Prestige Performance Lamborghini looked set for a top three finish, but it was not to be. In the closing stages of the race, the rear tires of Middleton and McAleer’s car started fading and the team had to go into preservation mode. The PRO duo ultimately settled for fourth at the line.

In the PRO|AM class, Andrea Amici and Ashton Harrison immediately showed great pace in the bright red No. 25 Harrison Contracting Lamborghini. Starting second in class, Amici would hold his position until the leading car received a drive-through penalty with 41 minutes remaining. From there, Amici never looked back, extending his lead to 10 seconds before pitting to make the driver change. With Ashton Harrison in the car to finish out the race, the Harrison Contracting machine looked set for victory, when disaster struck. The engine quickly started overheating, eventually ending Amici and Harrison’s race while in a commanding lead.

Syndey McKee continued her fantastic progress in the No. 87 FaDa Racing Lamborghini in the LB Cup class. Qualifying fourth in class, the talented youngster put together a faultless 50-minute race at the tricky road course, crossing the line in third, scoring yet another podium finish.

In the second race of the weekend on Sunday, the closeness of competition was on full display. Starting the race in the No. 1 Prestige Performance Lamborghini, Stuart Middleton made a clean getaway from fifth on the grid in the PRO class. Middleton would hold position until the pit window opened, with the team opting to keep him out for a few laps longer than his competitors. The strategy appeared to be working as Middleton grabbed the lead with 28 minutes remaining, only for a full-course yellow to be displayed shortly thereafter. This packed the field up and meant that Middleton and his co-driver Stevan McAleer would drop to the back when making their mandatory pit stop. In the car for the final stint and despite only a few laps of green flag racing, McAleer made the most of his time to secure a podium finish of third in the PRO class.

Ashton Harrison would start the second race of the weekend in the No. 25 Harrison Contracting Lamborghini, rolling off fourth in the PRO|AM class and enjoying a clean race start. Harrison would hold position until the mandatory pit window opened, with Andrea Amici taking the wheel in the closing stages of the race. Despite two full-course yellow periods, Amici was able to gain a position, bringing the Harrison Contracting machine across the line third in the PRO|AM class, earning the duo some overdue good luck.

Having qualified third in the LB Cup class, Syndey McKee made a clean getaway at the legendary circuit. McKeep in the No. 87 FaDa Racing Lamborghini would hold position until the pit window opened, when she vaulted into the lead with the top two cars pitting. Despite the full-course caution coming out with 28 minutes remaining, McKee was able to keep the lead in the LB Cup class after her mandatory pit stop, making it a thrilling battle to the end of the race. McKee would not falter under pressure, winning her very first race in the North America Lamborghini Super Trofeo Championship.

The Prestige Performance with Wayne Taylor Racing team travels to Sebring International Raceway on November 13 for the final two rounds of the 2020 Lamborghini Super Trofeo North America Championship. Race coverage will be broadcast live on IMSA.com/tvlive.

No. 1 Prestige Performance WTR, PRO: Fourth place overall
Stevan McAleer: “Obviously I’m pretty disappointed finishing fourth today. I was really looking to getting on the podium and our first win. We might have been a little over on tire pressures on the second stint, they bled a lot out on the pit stop. It is a positive for tomorrow because I thought the car was great at the start and that we could challenge for the win. We’ll take another day tomorrow and see if we can get on the podium.

Stuart Middleton: “It’s been a bit of a tricky race one for us. We gave it our all, but it was a hard one on track. We battled tire problems throughout the race which made it difficult to drive. Fingers crossed we’ll put our heads down and come back stronger tomorrow.

No. 25 Harrison Contracting, PRO|AM: Fourth place in class
Ashton Harrison: “Unfortunately Andrea and I didn’t have a great race today. He started the race with a great stint and gave us a mega lead. I really felt like we should have won today. Our pace was there, we had a great strategy, and we had a gap over second place. Andrea gave me good tire life and by the time the car left pit lane the car felt fine, but we had a mechanical and the car went up in smoke on my second lap. We had no power. It’s unfortunate, but the Wayne Taylor Racing guys are working on it and I feel confident that we’ll be back for race two. I’m looking forward to finishing the season on a high note.”

Andrea Amici: “We started the race very well. After a few laps we were leading in the PRO|AM category. Everything was going well, and we went into the pit with a ten second gap over second place. We had a great driver change, but when Ashton went out, we had a misfire and we had to stop the car. We are disappointed, but we are looking forward to a good performance tomorrow. Today the car was very good to try and we’ll be positive for tomorrow, work to recover from the back, and put the car on the podium.”

No. 87 FaDa Racing, LB CUP: Third place in class
Sydney McKee: “Overall a very strong race with nothing too eventful which is typically very good in a race car. Pretty happy with a third-place finish and my first time at Laguna Seca. There was a lot of learning right out of the gate and it’s paid off so far. It’s great that we have one more race so we can try to climb another step on the podium, but overall very happy.”

Stevan McAleer, No. 1 Prestige Performance Lamborghini Huracán Super Trofeo (PRO) “Crazy race today. I only got two laps of green flag racing, but the two laps I had were a ton of fun. There was a lot of different traffic out there and I was just trying to manage the tires for the last few laps. We got lucky on some penalties on the other teams, so we ended up third in the Pro class. I’m disappointed because I thought we were going to get some wins this weekend but looking ahead to the Sebring finale where we’ll have some fun at my favorite track and see where we can finish.”

Stuart Middleton, No. 1 Prestige Performance Lamborghini Super Trofeo (PRO) “Another tricky race for us this weekend. I was pushing the absolute maximum every lap. We have some work to do before Sebring, but I’m very thankful for the Wayne Taylor Racing team.”


Ashton Harrison, No. 25 Harrison Contracting Lamborghini Super Trofeo (PRO|AM) Race two was much better for Andrea and me. We podiumed which is a plus in general, not just because we got a trophy and some champagne, but because we need the points. We had a rough day yesterday, and our motor was great today. The guys put in numerous hours to get it ready and we made it just in time. This podium is for them from all the hard work they put in to get our car ready. Looking forward to Sebring and finishing the 2020 season.

Andrea Amici, No. 25 Harrison Contracting Lamborghini Huracán Super Trofeo (PRO|AM) “A podium finish today at Laguna Seca. I want to thank the guys for doing the engine change last night. We were a bit unlucky today because we lost the some due to the yellow. But it’s always good to finish on the podium. The team did a great job this weekend!”

Sydney McKee, No 87 FaDa Racing Lamborghini Huracán Super Trofeo (LB Cup)
Super excited for my first win in Lamborghini Super Trofeo at Laguna Seca. It’s my second race here, so it feels like a big win. It was an amazing call by the team to bring me in when they did, and the couple yellows helped shuffle the field as we needed. It was a huge confidence boost and we’re looking to carry this momentum going into Sebring in a couple weeks.”