Renger van der Zande, Ryan Briscoe and the No. 10 Konica Minolta Cadillac DPi race team will resume their IMSA WeatherTech Championship chase this weekend with the IMSA WeatherTech 240 at DAYTONA. The last time the team competed at the July 4th sprint race in 2009, it took home top honors with team owner, Max Angelelli at the helm. 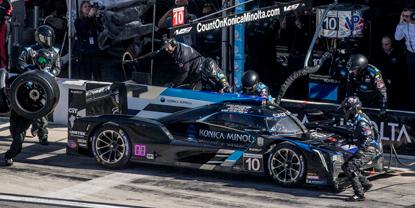 Renger van der Zande, Ryan Briscoe and the No. 10 Konica Minolta Cadillac DPi race team will resume their IMSA WeatherTech Championship chase this weekend with the IMSA WeatherTech 240 at DAYTONA. Coming off their historic Rolex 24 at Daytona victory earlier this year, the Dutch-Australian duo will once again race around the 3.56-mile, 12-turn Daytona International Speedway road course, this time for a two-hour and 40-minute sprint race, the second round of the 2020 season.

The Konica Minolta Cadillac team has an impressive history of endurance success at Daytona International Speedway having won three of the last four Rolex 24 at DAYTONA races. Most recently van der Zande and Briscoe were joined by Scott Dixon and Kamui Kobayashi for the 2020 endurance race victory; Kobayashi also won the coveted Rolex title with the team in 2019. Dixon will return to the No. 10 Konica Minolta Cadillac DPi-V.R for the Motul Petit Le Mans and Twelve Hours of Sebring later this year.

The last time the team competed at the July 4th sprint race in 2009, it took home top honors with team owner, Max Angelelli, and Brian Frisselle at the helm. Overall, the No. 10 Konica Minolta Cadillac DPi-V.R team has one victory, one starting pole position, and two podiums at the Daytona sprint race events.

“We’ve been successful every time we’ve competed at Daytona International Speedway during the July Fourth weekend,” said team owner Wayne Taylor who won the event as a driver in 2004 and as a team owner in 2009. “It’s a great event. And I’m happy to return to Daytona after a long break. I don’t think we’re over COVID-19 yet, but IMSA has made some strict safety precautions that will keep everyone healthy and safe. We are happy to be able to get back to racing. We’re all excited and our sponsors have been waiting diligently, so I guess my vacation is over. It’s going to be a bit strange with limited spectators, but I’m very much looking forward to resuming the season after our 24-Hour victory.”

After turning the quickest lap at the 58th Rolex 24 at DAYTONA in January, with a time of 1:34.652 at 135.401 MPH, Renger van der Zande is eager to return to the cockpit of the No. 10 Konica Minolta Cadillac DPi and maintain the outfit’s strong start to the season.

“The thrill of going back to racing is enormous,” commented van der Zande. “We’ve been in a complete pause of racing, but we have done a lot of work in the background to get fit physically and mentally. I’ve been able to spend very special time with the family and make the most of this uncertain time. I am very motivated for Daytona, but we know it is going to be a hard race. I’m feeling very positive going into the race as we’ve been leading the championship for four months. I’m really looking forward to getting started and seeing my team very soon.”

“I’m obviously super excited to get back to racing!” commented Briscoe, “It will be really nice to reconnect with everyone at Wayne Taylor Racing and the IMSA WeatherTech Championship as well. Although we’ll be at the same track where we won back in January, this summertime sprint event will be a totally different beast compared to the Rolex 24 winter endurance race. There won’t be much opportunity to ease back into things and I look forward to the challenge of being in full attack mode right from the outset. It has been a challenging time for everyone on the corporate side of things and I will be pushing hard to deliver for Wayne and all of our partners and supporters.”

The first practice for the IMSA WeatherTech 240 at Daytona begins Friday evening, June 26, at 6:15pm EST. On Saturday, DPi-class qualifying will be live on IMSA.TV at 2:45 p.m. EST, with live timing and scoring available at IMSA.com and via the IMSA mobile app. The green flag will wave at 6:05 p.m. EST on Saturday evening with live coverage beginning at 6:00 p.m. EST on NBCSN.