With a second place finish at the Cadillac Grand Prix of Sebring, the No. 10 Konica Minolta Cadillac DPi-V.R team retook the lead in the 2020 IMSA WeatherTech Daytona Prototype championship standings. 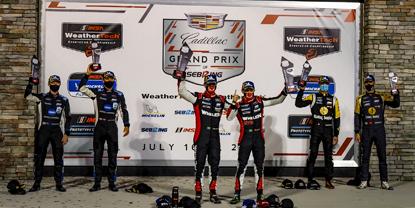 The IMSA WeatherTech SportsCar Championship continued its 2020 season with a two-hour and 40-minute sprint race at the historic 17-turn, 3.74-mile asphalt and concrete-surfaced Sebring International Raceway. With a second place finish at the Cadillac Grand Prix of Sebring, the No. 10 Konica Minolta Cadillac DPi-V.R team retook the lead in the 2020 IMSA WeatherTech Daytona Prototype championship standings with 92 points.

After qualifying in third position, starting driver Renger van der Zande made an early pass on the first lap to take second place, charging ahead to fight for the lead with a dominating No. 31 Whelen Cadillac DPi. The No. 10 Konica Minolta Cadillac team ran atop the field consistently throughout the race with Ryan Briscoe bringing the car home in second place to make it a Cadillac 1-2-3 finish. This was Sebring International Raceway’s first summertime event, adding challenges of extreme heat and a threat of thunderstorms throughout the atypical sprint event.

“It is nice to be back on the podium again,” said team owner Wayne Taylor. “Congrats to the 31 car. It is great to see our three Cadillacs on top at the Cadillac Grand Prix of Sebring weekend. Renger and Ryan really drove well. They did a fantastic job. They truly complement each other and work very well together. The team should be proud of themselves. They worked really hard and their pit stops were spot on. There are still many races to go and we have a lot of work to do, but overall it was a great weekend.”

“It was a really good result today,” commented Ryan Briscoe. “Unfortunately, there was a lot of time management at the end. I’m really proud of the No. 10 Konica Minolta guys. We made a lot of changes to the car after we started the day on a bad foot at morning practice. We ended up with a great setup during the race, so thank you to the engineering. We’ll keep pushing from here on. Now, it’s time to hydrate.”

“Second place in Sebring today,” said Renger van der Zande. “It was super-hot, and people were falling out of the car when they came back out of the race. We made big progress on the car throughout the race weekend. It was hard work but was totally worth it. It always feels good to be on the podium. We just need to find a little bit more speed, so we can win a race again. Let’s do it at Road America.”

The No. 10 Konica Minolta Cadillac DPi-V.R will travel north to Elkhart Lake, Wisconsin for a two-hour and 40-minute sprint race at Road America on Sunday, August 2. Round four of the IMSA WeatherTech SportsCar Championship will be broadcast live on NBC at 12:00 p.m. ET.