Traditionally held in March but moved to November due to the pandemic, the event has now become this season’s series finale and the stakes couldn’t be higher with the No. 10 Cadillac team which sits just two points from the lead. 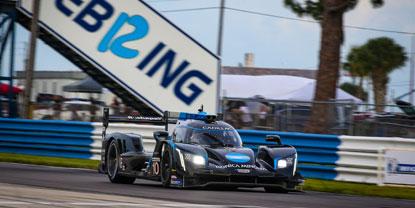 With the 2020 IMSA WeatherTech SportsCar Championship title on the line, Renger van der Zande, Ryan Briscoe and newly named NTT INDYCAR Champion, Scott Dixon, and the No. 10 Konica Minolta Cadillac DPi-V.R team readies for a much anticipated shoot out at this weekend’s 68th Annual Mobil 1 Twelve Hours of Sebring.

Traditionally held in March but moved to November due to the pandemic, the event has now become this season’s series finale and the stakes couldn’t be higher with the No. 10 Cadillac team which sits just two points out of the points from the leaders in the No. 7 Team Penske Acura AXR-05 of Ricky Taylor and Helio Castroneves. The Konica Minolta team currently also holds a five-point lead in the Michelin Endurance Cup Championship.

In six years of competing at the historic event, the team enjoys an average finish of fourth, having won the 2017 spectacle while finishing second in 2015, 2018, and 2019. Last year marked the closest finish in the event’s 67-year history, with the No. 10 Konica Minolta machine finishing second just 1.030 seconds behind the race-winning car. The team previously competed at Sebring International Raceway in July for the first sprint race in series history there and finished second.

“Sebring is very special to me,” said team owner Wayne Taylor, the 1996 12 Hours of Sebring Champion and 2014 Sebring International Raceway Hall of Fame Inductee. “We’re going to be competing for the 2020 IMSA Championship against my son Ricky in the Acura Team Penske car who is two points ahead of our No. 10 Konica Minolta Cadillac DPi-V.R. This is a two-way battle, but nothing is impossible for other teams to win the championship. Because of the closeness of the points and shortness of teams, it makes it harder for teams who are down a few points to come back. We’re going to be doing everything to beat Team Penske because I want to go out on a very high note for Cadillac as this will be my last race with them. I’d also like to thank IMSA for making all of this happen. This has been a tough year and they’ve done a good job. I can’t wait to be in Sebring in a few days!”


Renger van der Zande
“We have a big thriller of an event coming up with the 12 Hours of Sebring. We’ve been fighting for this championship all year long and it’s come down to the scoring three points more than the No. 7 car and keeping an eye out on the No. 31 car which is seven points behind us. Normally the long races are good for us, but Sebring is a tough race and it’s going to be hot even though we’re late in the season. I think it’s going to be an exciting weekend and we have a strong driver lineup. It’s going to be a long race and all focus is on that as it’s going to be a fight. This will be my last race with Wayne Taylor Racing and I would like to take the opportunity to thank our corporation with a win and a championship. So, the goal is a win.”

Ryan Briscoe
“We’ve had an incredible season in 2020 with a couple of big wins at the Rolex 24 and Petit Le Mans. It’s now time for the Sebring 12 and I’m really excited to be fighting for this Championship title. Renger and Scott are amazing teammates and we are all feeling more driven than ever to get this job done!”

Scott Dixon
“Super excited for the 12 Hours of Sebring. It’s definitely a different time and the last race of the season which will be very cool. Winner takes all. The goal is to win the 12 Hour since I’ve never won it before and obviously the team would love to win the championship. So, that’ll be the one goal to win that championship for everyone, so really excited to finish out the season strong and fingers crossed everything goes over smoothly.”