With one event, two rounds of hard racing and one recent test under their belts, the Prestige Performance Wayne Taylor Racing team, drivers and 5-car stable of Lamborghini Huracan Super Trofeos look to hit their stride on the 3.4-mile, 11-turn historic track of Watkins Glen (N.Y.) International, June 28th- 29th . 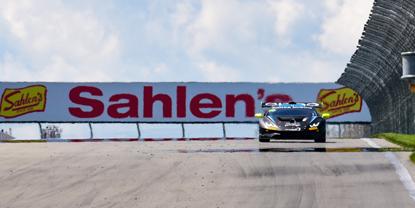 With one event, two rounds of hard racing and one recent test under their belts, the Prestige Performance Wayne Taylor Racing team, drivers and 5-car stable of Lamborghini Huracan Super Trofeos look to hit their stride on the 3.4-mile, 11-turn historic track of Watkins Glen (N.Y.) International, June 28th- 29th .
Once again, all four classes of the North American Lamborghini Super Trofeo Series will be represented, with 2003 Champ Car Champion Paul Tracy taking over co-driving duties in the No. 69 Hubbell Racing LST from IMSA WeatherTech Prototype driver, Eric Curran, as well as with the addition of a fifth entry in the PRO|AM class to be driven by Canadian Businessman Bradley Baker and former Formula 3000 champion and three-time runner-up in the Champ Car World Series Bruno Junquiera in the No. 53 Prestige Performance Super Trofeo.

No. 53 Prestige Performance Lamborghini Huracan Super Trofeo
• Bradley Baker (AM) and Bruno Junqueira (PRO)
• Canadian Brad Baker has raced Formula Ford in his early career and returned in 2017 to race Historic events. Baker has also raced IMSA LMP3 in 2018 and 2019.
• Former IndyCar driver Bruno Junqueira has a long history of racing as runner up in IndyCar championships (2002-2004), Indy 500 Pole Winner (2002), Williams F1 test Driver (2000) and F3, F3000 and Karting Championships in Brazil and South America. He most recently has seen five wins in LMPC class with IMSA.


DRIVER QUOTES
ANDREA AMICI, No. 1 Prestige Performance Lamborghini Huracán Super Trofeo (PRO):
“It’s been a long stop since the first round in Barber. I’m very excited to get behind the wheel. We need to recover the championship’s points lost in Barber. We’ll do the best to achieve a great result here. WGI seemed a really tough circuit already at the beginning of the first test session. At the same time, it has become one of my favorite race tracks, full of high-speed corners, with the wall always by your side. It’s always nice to race in a circuit with a big history, but it becomes even more special when you race in track with these features. The test has been really helpful. The new car was running great. We found immediately a good set up. We are confident for a good race result.”

SANDY MITCHELL, No. 1 Prestige Performance Lamborghini Huracán Super Trofeo (PRO):
“I’m super excited to be back in the Lamborghini Super Trofeo Series at Watkins Glen. There has been a long gap between the first two rounds so it will be fantastic to be racing again. Our aim is always the same, we will be going out to win each race. I’m confident our #1 Prestige Performance crew will be able to be right at the front of the grid on race day. The test went very well at Watkins Glen. Andrea and I had good pace very quickly and picked up this exciting track well. We made some good improvements with the car and our Prestige Performance -Wayne Taylor Racing team did a fantastic job, Andrea and I were very excited leaving the circuit, fair to say we both enjoyed it! I loved driving the circuit at the test. It’s now one of my favorite tracks I’ve ever been to. The undulation, grip levels and lack of run off mean it’s an action packed and exciting lap. I felt we had a very good car at the test so I’m feeling great going into the weekend.”

ASHTON HARRISON, No. 43 Prestige Performance Lamborghini Huracán ST (LB CUP)
“I am so excited for rounds 3&4. Our test at Watkins Glen was incredible! Watkins Glen is one of my favorite tracks and to drive our #43 Prestige Performance/Wayne Taylor Racing Lamborghini was a dream. I believe Stephanie and I are as prepared as we can be to battle in the LB Cup class. I believe we showed our pace at Barber Motorsports Park and I’m more than ready to put our #43 Prestige Performance/Wayne Taylor Racing Lamborghini in P1, where it belongs. Fast, fast, fast! Our Lamborghini is a rocket at Watkins Glen. I have been to WGI numerous times and every time it keeps getting better. The grip is incredible, the car is so well set up and I’m confident that we are on pace for the race weekend. The Esses and Bus Stop are my favorite parts about WGI. It flows so well, but for me the history behind it is awesome. Being able to drive on such a historic track in our Lamborghini is a great feeling. I thrive off moments like that, so I feel confident going into the race weekend that we will perform as needed to get that win, we deserve."

STEPHANIE CEMO, No. 43 Prestige Performance Lamborghini Huracán Super Trofeo (LB CUP):
“I am super excited for our race at The Glen. I feel like our team is ready to get after it … seems like forever since Barber. The test last month was such a massive benefit for me. I am happy the team made that happen for us. Ashton and I are ready! Watkins Glen is most likely the fastest track I have been to. I love the elevation changes, flow of the corners and layout. The walls … not so much. Lol … I feel that the walls make it more challenging to brake later and get on the gas sooner, being there isn’t much runoff. However, that is part of why the track is so exciting! I feel Ashton and I will finish strong in LB Cup after having the opportunity to test before the race weekend.”

CAMERON CASSELS, No. 33 Prestige Performance Lamborghini Huracán Super Trofeo (AM):
“Watkins Glen always provides great racing and I am sure rounds 3&4 will not disappoint. The high horsepower of the Lamborghini Huracan is really well suited to the high speed and flowing nature of the circuit. The test went very well. Although the weather did not always cooperate, I think we are well prepared to get back on the podium. It will be great to get back in the car after the long break since our last race at Barber! Watkins Glen just has amazing history with Formula 1, NASCAR, Indy Car, Can-Am and sports cars that have all raced there. It is one of those tracks that is pretty humbling to be on considering the long list of accomplished drivers that have competed and won at WGI. “

WILLIAM HUBBELL, No. 69 Prestige Performance Lamborghini Huracán Super Trofeo (AM):
“I am looking forward to getting back on the track at WGI with Wayne Taylor Racing and with Paul Tracy as my co-driver for the Lamborghini Super Trofeo races. Last year was a bit of a learning curve for me at the track and learning the new car. This year we are off to a better start. We came to test a few weeks ago and were able to find a bit more speed on the track and hope to have better results this time around because of it. The series is getting more competitive with more racers participating. The Hubbell Bubbles will also be out in full force to greet the race fans. Hope everyone stops by our transporter in the Lamborghini paddock area and says hi!”

PAUL TRACY, No. 69 Prestige Performance Lamborghini Huracán Super Trofeo (PRO):
“I’m super excited to get back behind the wheel of a racecar again at Watkins Glen with Hubbell Racing . I have raced at the Glen in an IndyCar and a Prototype and I am looking forward to see how the Lamborghini feels at this iconic track."

BRUNO JUNQUEIRA, No. 53 Prestige Performance Lamborghini Huracán Super Trofeo (PRO):
“I am excited to do my first Super Trofeo race. The car is fast and WG is a fun track to drive. It will be nice sharing the car with Brad. It was a good test for me and Brad, it was our first contact with the car and we liked it. WGI is a fast and fun track. It is a track you have to carry a lot of speed throw the corners. WTR was able to improve the car in the test and I think that will help in the race weekend."