It’s back to endurance-racing mode for Jordan Taylor and Renger van der Zande and their No. 10 Konica Minolta Cadillac DPi-V.R team, and it couldn’t come at a better time. 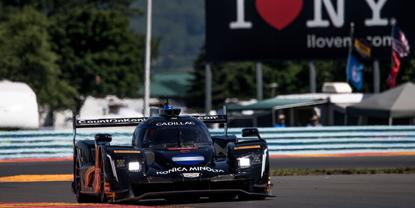 It’s back to endurance-racing mode for Jordan Taylor and Renger van der Zande and their No. 10 Konica Minolta Cadillac DPi-V.R team, and it couldn’t come at a better time.

The second half of the 2019 IMSA WeatherTech SportsCar Championship kicks off with Sunday’s Sahlen’s Six Hours of The Glen on the iconic Watkins Glen (N.Y.) International road course, and the team finds itself with some ground to make up over the final five events if it is to hoist the championship trophy at season’s end for the second time in three years.

Huge momentum after a resounding victory at the season-opening Rolex 24 At Daytona followed by a solid runner-up finish at the Mobil 1 Twelve Hours of Sebring got sidetracked by race-day issues that led to results of 10th and ninth, respectively, on the street courses in Long Beach, Calif., and Detroit, which sandwiched a sixth-place finish at the Mid-Ohio Sports Car Course in Lexington.

Consequently, Taylor, van der Zande and the team find themselves fifth in the championship, 17 points out of first, but arrive at Watkins Glen filled with the hope and confidence they can get back to the business of winning races in bunches.

It’s been the endurance races in particular where the team has proven to excel, of late, with a pair of wins and a runner-up finish to show for it. Taylor, van der Zande were joined by IndyCar star Ryan Hunter-Reay in their dramatic victory at last year’s 10-hour, season-ending Petit Le Mans at Road Atlanta, and promptly followed that up with their victory alongside Formula One veteran Fernando Alonso and former Formula One and current FIA World Endurance Championship regular Kamui Kobayashi at the Rolex 24. Then, at Sebring, a mere 1.030 seconds at the finish separated Taylor, van der Zande and third co-driver Matthieu Vaxivière of France from the team’s third consecutive endurance-racing victory.

With this year’s Daytona and Sebring results, the team is tied for the lead in the Michelin Endurance Cup “championship within the championship,” where points are accumulated in the four marathon races at Daytona, Sebring, Watkins Glen and Road Atlanta. Maintaining that position will be one of the team’s priorities at The Glen this weekend, and if successful, it will re-inject some much-need momentum it hopes will last through the latter half of 2019.

Practice for the Sahlen’s Six Hours of The Glen begins Friday morning with DPi-class qualifying set for 12:25 p.m. EDT Saturday with live streaming video via IMSA.tv and the IMSA Mobile App beginning at 11:25 a.m. The green flag for Sunday’s six-hour race flies at 9:45 a.m. with television coverage by NBCSN set for 7 to 10 p.m. Live video coverage of the entire race is available via the NBC Sports App and at NBCSports.com from 9:30 a.m. to 4 p.m. Live timing and scoring during all on-track sessions is available at IMSA.com and via the IMSA smartphone app.

You’re kicking off the summer stretch of races on natural road courses and are still very much in the championship hunt. What are your thoughts about the team’s ability to take advantage and put together the solid results during this stretch?

“We have had an up-and-down year, but we are about to get into the real meat of the championship. We have back-to-back weekends at Watkins Glen and Mosport, which can make or break your year. We had really strong races there last year, finishing as the top Cadillac at both events, so I am excited to get back there. We had a really good test at Watkins Glen a few months ago, which I think will help us at both races.”

Your thoughts about the Watkins Glen track, its history, the circuit itself, do you like it, what do you like about it, what is challenging about it, and where do you feel the team will be strongest there, etc.

“Watkins Glen is one of the few tracks left in the world that still has that old-school feel to it. It’s high speed with no room for error and requires a high level of commitment. It’s a lot of fun to drive but makes for an intense six hours.”

Thoughts about the championship? The team lost a little more ground with the result at Detroit but the second half of the season remains.

“We’re definitely not out of it, by any means, but we need to stay on top of the results. We need to get back to regularly being on the podium. We’re coming into the part of the season where there are a lot of important races, so we need to make sure we’re ready to maximize the points every chance we get.”

Your thoughts about this weekend’s race at Watkins Glen, where you will be kicking off the second half of the season with a 17-point deficit to try and make up in the championsihp?

“It will take a lot of work and some good fortune, for sure. But as is always the case, winning races is always the best solution. So, if we perform to our maximum capabilities, the hunt for the championship will be a good one the second half of the season.”

Your thoughts about the Watkins Glen track, its history, the circuit itself, do you like it, what do you like about it, what is challenging about it, and where do you feel the team will be strongest there, etc.

“I really like the place. It’s one of those famous tracks in the U.S. In Europe, everybody plays it on the PlayStation. It’s a track with a lot of flow and lot of momentum, fast corners, and I don’t think we ever even get down to second gear. It’s always great to go there. The history of the track, it’s an ex-Formula 1 track and everybody likes to go there.”

We kick off the second half of the season with the six-hour Watkins Glen endurance race. Your thoughts?

“Watkins Glen, like I’ve always said, is my favorite track, and it’s even better since it’s been resurfaced. We tested there a while back and it went pretty well for us. It’s definitely going to be a very fast race with a lot of extremely fast cars that we will have to try and find a way to beat. For sure, we will have to once again do it with our pit stops and strategy if we are going to be there at the end. The beauty of this team is that we have the best drivers, as a unit, and the best team and strategists. So that should go a long way toward helping us try and bring home a win on Sunday. We certainly can use a win, right now but, like we do each and every race weekend, we’ll go out there and give it everything we’ve got.”