At the track known as America’s National Park of Speed, Jordan Taylor and Renger van der Zande would love nothing more than to set up camp in victory lane Sunday by scoring the No. 10 Konica Minolta Cadillac DPi-V.R team’s first-ever IMSA WeatherTech SportsCar Championship win on the 4.048-mile, 14-turn Road America circuit. 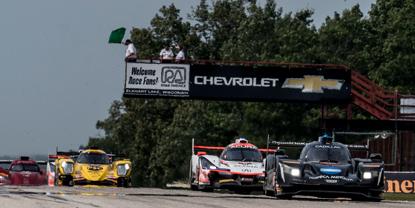 The team has certainly come close to capturing the IMSA Road Race Showcase each of the past two seasons.

Last year, Taylor found himself in the lead during the closing laps after some creative fuel strategy by technical director Brian Pillar and assistant engineer Adam Banet. But the strategy was dependent upon a late caution flag that ultimately never came. So, after leading eight laps, Taylor had no choice but to pit with five minutes remaining for fuel enough to get him to the finish.

It was a gut-wrenching fourth-place finish for the team that stormed to the 2017 championship at the hands of Taylor and his older brother Ricky, who has since departed for the two-car Team Penske DPi-class effort. And the 2017 race at Road America was gut-wrenching in its own way for the No. 10 Konica Minolta Cadillac DPi-V.R team. Ricky Taylor qualified on the pole in track-record time, and Taylor brothers led the opening 51 laps of the 71-lap race – quite comfortably. But a flurry of cautions during the closing laps of the race bunched up the field and enabled the No. 22 Tequila Patron Nissan of Johannes van Overbeek to slip past for the victory. That second-place finish was relatively easier to swallow for the team, however, as it opened up what turned out to be an insurmountable 26-point lead in the championship for the Taylor brothers.

This year, Taylor, van der Zande and the team arrive at scenic Road America tied for fourth in the championship a seemingly mountainous 19 points behind to the front-running No. 6 Team Penske entry of Juan Montoya and Dane Cameron. With just three races remaining, it will take a flawless sprint to the finish for the No. 10 Konica Minolta Cadillac DPi-V.R team, something it has proven to be more than capable of throughout its history, to be in position for its second championship in three years. With so much ground to make up, it will take the kind of creativity that nearly led to a victory last year at Road America, as well as some breaks along the way.

But, like any mountain climber will say, every climb begins with that first step, and for the No. 10 Konica Minolta Cadillac DPi-V.R team, that first step comes Sunday in America’s Dairyland.

Practice for the IMSA Road Race Showcase begins Friday morning with DPi-class qualifying set for 2:25 p.m. EDT Saturday with live streaming video via IMSA.tv and the IMSA Mobile App beginning at 1:25 p.m. The green flag for Sunday’s two-hour, 40-minute race flies at 2:35 p.m. with live streaming video via the NBC Sports App and NBCSports.com. NBCSN will televise the race beginning at 6 p.m. Sunday. Live timing and scoring during all on-track sessions is available at IMSA.com and via the IMSA smartphone app.

Your thoughts about heading to Road America for Sunday’s IMSA Road Race Showcase?

“We always love going back to Road America. We’ve always had a strong car there but have never won the race. I think it’s the only race on the calendar that our mechanic Bill Mullen hasn’t won. We are very focused on going there and winning the race this year. I love going there. It’s one of the coolest tracks we have here in North America. Super long, 4 miles, very old-school, no room for error so, for us in IMSA, it makes for a very exciting race. It also makes it difficult for the engineers to set up the car. It’s always an exciting one.”

It’s a track full of compromises. How would you describe what it’s like to race there?

“Road America is a very narrow, very tricky track. So, with three or four classes here in IMSA, it makes traffic very difficult. If you’re not able to get them before the Carousel, you can easily lose two to three seconds stretching from there to the backstraight. So, you’ll see a lot of aggressive racing, especially in the last part of the race.”

The team’s never won at Road America, but do you have any lasting memories of having raced there?

“My most memorable moment from Road America was 2011. It wasn’t a great moment, but we saved fuel the entire race and, unfortunately, (leader) Scott Pruett wasn’t going fast enough and didn’t lap me before we got to the finish line, so we had to do one extra lap and I got passed by four guys trying to make it to the end on fuel.”

Your thoughts about heading to Road America for Sunday’s IMSA Road Race Showcase?

“I’m looking forward to Road America this weekend. It’s one of the old-school tracks – the wall’s close, no track limits, high-speed, low-speed and a big straight. So, wherever we start, there’s got to be a big tow, and there’s always trouble going into turn one. I always like going to Road America. The fans get close. They’re pretty committed. They come every year and you become friends with them. It’s one of those tracks that’s a big highlight on the calendar.”

What will it take for the team to finally pull off its first Road America victory this weekend?

“Road America also is all about strategy for us. Last year, we needed to find a way to win the race even though we weren’t the fastest on the track. We were leading and almost got the win, but the yellow never came out that would have made it happen, so we had to give up the lead and ended up finishing where we started – fourth. Hopefully our creativity will work for us this year and we get some breaks along the way.”

Your overall thoughts as you head to Road America for Sunday’s IMSA Road Race Showcase?

“With three races to go in the championship, this weekend adds up to be very important. They’re all important, when you get down to it, but we have 19 points to make up in the championship and we’re in big need of some momentum. The team and the drivers did their typical, exceptional job at Mosport and all we were able to get out of it was a sixth-place finish. We finished second at Road America two years ago after leading most of the race, and last year we took a gamble on strategy and it didn’t pay off because the race went green all the way to the finish. All we can do is just keep doing what we’ve been doing and do it with the things that have set us apart over the years – our superior driving, strategy and team performance on the pit stops. Road America has always been a good track for us even though we’ve never won there. I think this will need to be the year we finally turn that around.”