Much-loved Raceway Laguna Seca held true to the stories of challenges made by this old school track that mixes high-speed corners and dramatic hills, such as the famous “Corkscrew”, when competitors of the North America Lamborghini Super Trofeo Series took to the 2.238 mile road course for Rounds 9 & 10 this past weekend. 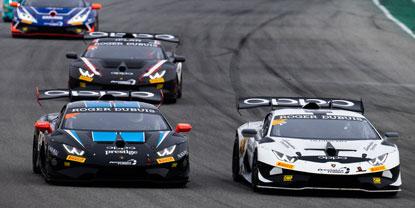 Much-loved Raceway Laguna Seca held true to the stories of challenges made by this old school track that mixes high-speed corners and dramatic hills, such as the famous “Corkscrew”, when competitors of the North America Lamborghini Super Trofeo Series took to the 2.238 mile road course for Rounds 9 & 10 this past weekend.

Representing all four classes, the five Lamborghini Super Trofeo Huracans of Prestige Performance with Wayne Taylor Racing were focused not only on their races, but also in securing much needed points in their individual Championships as the season quickly winds down.

With two podium finishes, Andrea Amici and Sandy Mitchell were hard pressed to hold onto their runner-up position in the PRO CLASS Championship. They and their No. 1 Prestige Performance LST still remain a close 6 points from second and 12 from the leaders, Corey Lewis and Richy Antinucci.

The Prestige Performance with Wayne Taylor Racing team saw several podium finishes in the PRO|AM class. William Hubbell and Laguna Seca teammate and Spaniard Dani Clos, with two third place finishes, furthered the gap in the PRO|AM Championship, seemingly locking out any future competition from undoing Hubbell’s current second place standing. Dean Baker and his teammate and driver coach, Bruno Junquiera drove the No. 53 Prestige Performance LST to a second-place finish in Round 9 (Race #1) and fourth in Round 10 (Race #2). A remarkable effort given it was Baker’s first time in a Lamborghini Super Trofeo.

Cameron Cassels, who once again was juggling races in both the AM Class in the Lamborghini ST Series and the LMP2 Class in the IMSA WeatherTech Series this weekend, finished 3rd and on podium in both races with his No. 33 race car, whittling away the Championship gap for second place to just two points.

In perhaps one of the most memorable battles of the weekend, Stephanie Cemo and Ashton Harrison in the LB Cup drove from 5th to 2nd in Race #1, narrowly missing the win. Starting on pole for Race #2, Harrison was once again making a clear statement for the win when a mechanical error took the dynamic duo from their hunt. Ashton Harrison still ended up with Fastest Lap in both Class and Circuit in Race #2, before having to retire the No. 43 for the weekend.

With one final round and two races left before the World Finals, the Prestige Performance with WTR remains in a close battle for one of the Top 3 spots in the Team Championship, wile holding on tightly to their current second place standing in the Dealer Championships, just 7 points out from the Leader.

ANDREA AMICI, No. 1 Prestige Performance Lamborghini Huracán Super Trofeo (PRO):
“It was a great result today. It was difficult to overtake in the beginning. I tried to save the position and then in one corner, I went too much outside and lost the position. Fortunately, I was able to get it back. The car was good. I pushed through my stint to make up as much as possible. We think it was a good result and feel good about the final rounds and the World Finals.”

SANDY MITCHELL, No. 1 Prestige Performance Lamborghini Huracán Super Trofeo (PRO):
“It was an exciting race. We came in second which is good. When I jumped in the car after Andrea, I think we were in P4 and I managed to overtake one car and then another car on a penalty. There was quite a big gap between us in second and the leader but the No. 1 Prestige Performance car was really quick and I was able to catch up a few seconds onto the leader. I was able to make it difficult for him the last few laps, but just couldn’t quite find a way to pass. It is quite hard to over take at Laguna Seca. Really good P2 and big thanks to the team for all their hard work this weekend.”

DEAN BAKER, No. 53 Prestige Performance Lamborghini Huracán Super Trofeo (PRO|AM-AM):
“We had a lot of fun today. We had a good race and I learned a lot about the car. I had a great time with Wayne Taylor Racing and Lamborghini this weekend. Big thanks to Bruno Junquiera. I have never driven a GT car like this before, so it is very different. Would love to come back and try it again.”

BRUNO JUNQUIERA, No. 53 Prestige Performance Lamborghini Huracán Super Trofeo (PRO|AM-PRO):
“I had a good race today. I had good pace and was able to leave it in a good position for Dean. Unfortunately, he got stuck in traffic and could not get his best laps. We had fun and thanks to Wayne Taylor Racing for a great weekend!”

WM HUBBELL, No. 69 Prestige Performance Lamborghini Huracán Super Trofeo (PRO|AM-AM):
“We had a good race; it was fun. The other cars were just a little too fast for us in the straights. No accidents and no big mistakes. And Dani pulled off a really great pass at the end to get us on the podium at the end.”

DANI CLOS, No. 69 Prestige Performance Lamborghini Huracán Super Trofeo (PRO|AM-PRO):
“It was a pretty intense race. I was feeling a little comfortable since Lap 1 when the car wasn’t steering well and I was suffering a little bit. But we were able to catch up and in the last lap in the last corner, we were able to make the move. A little on the limit, but always with respect. Great for Hubbell and great for myself. We are happy.”

ASHTON HARRISON, No. 43 Prestige Performance Lamborghini Huracán Super Trofeo (LB CUP):
“After Turn 11, about 5 minutes before the pit window, I was coming down the front straight and every time I up-shifted I knew something wasn’t right. I went into the Turn 2 and the car lost power, so at that point I was focused on getting out of the way. In Turn 3, the car stalled completely, and unfortunately, someone was close behind me so he ended up spinning out. I feel really bad for McKay (Snow) and for the situation. I was able to re-fire the engine and headed back to the pits. We unfortunately were done for the day.”

STEPHANIE CEMO, No. 43 Prestige Performance Lamborghini Huracán Super Trofeo (LB CUP):
“Naturally, Ashton and I are disappointed with what happened today but I must say it was an exciting weekend and I am delighted that my partner, The Package Center, saw such a great show. I am looking forward to the final two rounds at Jerez!”