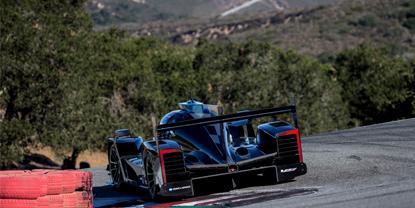 A year ago at the scenic 2.238-mile, 11-turn hillside road course, they were clicking on all cylinders through practice and qualifying, leading two of the three practice sessions on Friday and Saturday, and then qualifying on the pole at the hands of Taylor on Saturday afternoon.

But then came Sunday afternoon when, just 39 minutes into the two-hour, 40-minute main event, Taylor radioed from turn five, just as he was about to start the steep climb to the highest point on the course, that the racecar had lost drive. He helplessly crept ever so slowly up the hill before finally coming to a stop. A freak, catastrophic failure had ended what was a hugely promising weekend leaving Taylor, van der Zande and the defending series championship-winning team wondering what might have been.

As they return to the scene of last year’s misfortunes for Sunday’s Monterey SportsCar Championship, the general feeling is not surprisingly upbeat. Once again, the team is playing host to the typically large contingent of Konica Minolta sponsors and guests at one of their favorite stops on the tour. And Laguna Seca is a track where, despite just a 2013 victory since the team’s inception in 2007, it has started from the pole in three of its last four outings, and has stood on the podium after six of the last nine races.

And for added measure, the famed Corkscrew series of turns seven through eight is where van der Zande made his now-legendary pass to win the 2017 WeatherTech Championship race while driving for the No. 90 Spirit of Daytona team. It was a head-turning, jaw-dropping maneuver that not only drew the praises from throughout the worldwide road racing community, but helped bring him to the No. 10 Konica Minolta Cadillac DPi-V.R team the following season.

Van der Zande, who was to be last year’s closing driver at Laguna Seca, never got a chance to try and relive his late-race heroics from the previous season as the racecar was retired long before he was scheduled to get in.

So, as they set up shop for the weekend on the beautiful outskirts of Monterey Bay, Taylor, van der Zande and the No. 10 Konica Minolta Cadillac DPi-V.R team hope to finish the job that so cruelly eluded them a year ago.

Practice for the IMSA Road Race Showcase begins Friday with DPi-class qualifying set for 4:30 p.m. EDT Saturday with live streaming video at IMSA.tv and the IMSA mobile app beginning at 3:30 p.m. The green flag for Sunday’s two-hour, 40-minute race flies at 3:05 p.m. with live television on NBC beginning at 3 p.m. Live timing and scoring during all on-track sessions is available at IMSA.com and the IMSA mobile app.

Your thoughts about heading to Laguna Seca for Sunday’s Monterey SportsCar Championship?

“We always love going back to Laguna Seca. We got a win in 2013 and a few podiums, since. And it’s always a big event for Konica Minolta. We have a lot of guests coming to the track this weekend. Last year turned out to be a disappointing day there, obviously. We had the strongest car all weekend – fastest in two practices and we got the pole – and it was tough not to capitalize on a weekend like that. This year, we hope to come out of the box strong and then finish the job on Sunday.”

How would you describe the racing at Laguna Seca?

“It’s one of the best tracks we have on the circuit, a very old-school, natural-terrain track, very famous for the Corkscrew. The last couple of years, we’ve been very competitive with the Cadillac, including the last couple of pole positions and a podium two years ago. This year, we’re hoping we can get to the top step.”

Talk about your race there with Max “The Ax” Angelelli in 2013, when you were in pretty much a must-win situation to have a shot at the championship that year and the fact that you guys pulled it off.

“The end of 2013 was a dream. We had to win all of the last three races to have a shot at the championship and we did. We had an incredibly strong car for all of those races and were able to control the races from the front. We had perfect stops and strategy, so everyone executed perfectly to get those wins. We plan on doing the same this year.”

You had a ringside seat behind your now-teammate Renger van der Zande’s remarkable pass of Dane Cameron to win the race at Laguna Seca in 2017. Your memories of that, your thoughts of Renger’s seemingly “rock star” status at Laguna since then, and whether that pass was involved in the team’s decision to invite him to be your co-driver last year?

“I thought it was awesome. There aren’t many passes done in that corner, so when it tends to happen, it’s usually pretty spectacular. I think when we saw that kind of commitment from a driver going for a win, we knew he was someone we wanted in our car. I think he’s the perfect guy to have as a teammate at Laguna. Obviously going back, everyone is talking about that move from last year. I guess the only negative part about it is that people will be a little more aware of him being behind them going in there this year. The pass itself last year played a small part in the team’s decision. We knew what he was like as a driver and as a person. We had watched him for years in LMPC, and then coming into Prototype last year. He had always been at the front of the field in any car and class that he raced, so last year’s pass was just icing on the cake.”

Your thoughts about heading to Laguna Seca for Sunday’s Monterey SportsCar Championship?

“Laguna Seca is one of my favorite tracks to go to. My first time there, I liked it and I had great success, winning in LMPC, and I’ve always been quick there. I think to win this race you need to be good on tires. It’s a low-grip track, so tires burn off quickly and strategy is key. Every time I’ve done well it mostly had to do with strategy.”

With a 25-point gap to the championship leader with two races to go, what will be your approach the rest of the way?

“We have two more races to go. We won the first one this year, obviously, in Daytona, the 24-hour, the nicest one to win. We were a close second at Sebring, but after that it hasn’t gone as well as we would’ve wanted – the speed hasn’t been great in our car. At Laguna Seca, our car should be strong. There are not a lot of long straights and, in the corners, our car is very good-handling. We’re going to give it a big push these last two races, that’s for sure.”

Once again, you return to the scene of your somewhat legendary pass for the win in the Corkscrew two years ago. Any special thoughts on that as you head back to Laguna Seca?

“Every year I get the same question, ‘How was that pass at Laguna Seca two years ago.’ Obviously nice to get that question, but at the same time it’s in the past. I hope I can make a move like that in the Corkscrew or somewhere else again this weekend. For sure, I will hunt for it. It was a nice one, something to remember and something very cool to do. It was for the win and at that time we were hunting for the win and a not-so-good season and needed a podium. I asked the team if I should go for the victory and the team said yes. I went for it, it worked out, and the rest is history.”

Your overall thoughts as you head to Laguna Seca for Sunday’s Monterey SportsCar Championship?

“Winning the championship is always the priority, but it doesn’t seem to be in the cards this year despite our strong start by winning Daytona and finishing a close second at Sebring. Winning races and collecting podium finishes is always the focus and the way to win a championship. But this year, it’s been a struggle just to finish in the top-five. Still, we will go about our business like we do every weekend at Laguna, which has always been a fairly good track for us. We all love going out to Laguna Seca to race and to spend some time. It’s a big Konica Minolta-supported event and I think we have a good car in our Cadillac DPi-V.R that should give them something to feel good about again. We looked good there, leading practices and winning the pole, but we had an absolutely freak failure early in the race and that was all she wrote. I’m not sure whether we’ll have an outright winning car this weekend, but we certainly have the team and the drivers to hopefully put us in position at the end. The guys have had plenty of time to prepare for what we need to do this weekend, so we’ll see. Again, we may not be fastest car there, but we know we have a car and a team and drivers who can win, but we still have to finish. We’ll go to the race on the basis of trying to win the race, like we do each and every weekend.”