For the first time since their last podium finish at the Mobil 1 Twelve Hours of Sebring in mid-March, the No. 10 Konica Minolta Cadillac DPi-V.R duo of Jordan Taylor and Renger van der Zande got a modest taste of competitiveness this weekend at the Monterey SportsCar Championship at WeatherTech Raceway Laguna Seca near Monterey, California. 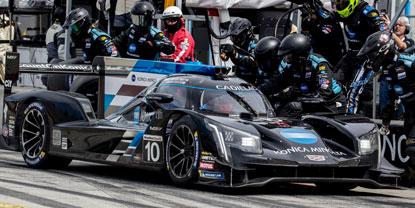 For the first time since their last podium finish at the Mobil 1 Twelve Hours of Sebring in mid-March, the No. 10 Konica Minolta Cadillac DPi-V.R duo of Jordan Taylor and Renger van der Zande got a modest taste of competitiveness this weekend at the Monterey SportsCar Championship at WeatherTech Raceway Laguna Seca near Monterey, California.

Taylor qualified a solid third Saturday for by far the team’s best starting position of the season, and he and van der Zande kept a solid grip on the final podium spot from start to nearly finish during Sunday’s two-hour, 40-minute IMSA WeatherTech SportsCar Championship race around the 2.238-mile, 11-turn iconic road course on the Central California coast.

But, after his fierce efforts to catch the front-row-starting Team Penske Acura DPi entries of Dane Cameron and Helio Castroneves over the latter half of the race, van der Zande wasn’t able to keep the No. 31 Action Express Racing Cadillac DPi-V.R of Pipo Derani behind him any longer and, with 11 minutes remaining, watched Derani slip past in a flurry of traffic in turns one and two and had to settle for a fourth-place finish.

“I drove my heart out,” said van der Zande, who won this event two years ago with a spectacular late-race pass while driving for the Spirit of Daytona team. “I think Jordan did a fantastic job in qualifying, and in the first stint today he did exactly what we needed – he kept the car in P3 and I was able to keep it in P3. I fought really hard for P2, but this is one of the most difficult tracks to overtake. You could see the guys who finished ahead of us, they had so much more pace where it was really only the first stint of the two I drove against them I could fight because they probably had a little bit of trouble with tire pressures. Then, as soon as they got their second set of tires on their cars, they just disappeared in the distance. I burned my tires a bit too much in the beginning of the last run trying to get by Castroneves for second. And that’s why at the end I struggled quite badly. In bad traffic, getting held up, unfortunately I had to let Derani get by and so we finished fourth. That’s not what we came for. We came to win.”

At the start, Taylor kept the Team Penske drivers in sight but never was quite close enough to fight for position. But neither was he threatened from behind during his one-hour, 16-minute opening stint in this race that was caution-free from start to finish.

“It was an OK day,” said Taylor, who qualified on the pole here last year for the team’s third pole in the previous four Laguna Seca outings. “We ran third for most of it. It was very tight in the middle of the field. The two guys up front were much faster, so we were pretty much racing for the final podium position. We stayed out of trouble the whole day. Good strategy, good pit stops, no mistakes on track, it was just a tough fight with traffic. So, I think we executed on most fronts. I think we can be happy that we’re more competitive than we’ve been the last several races. Hopefully we can go to Atlanta and try and repeat our win there last year.”

A podium finish would have enabled the team to jump from sixth to fourth in the championship, leapfrogging both Team Joest Mazda DPi entries that combined to win the last three races in dominating fashion but finished sixth and 10th today. Still, the No. 10 Konica Minolta Cadillac DPi-V.R team pulled to within just one point of both Team Joest Mazdas after this penultimate round of 2019.

Cameron finished 9.784 seconds ahead of Castroneves in the one-two finish for Team Penske. Derani crossed the finish line another 9.347 seconds back in third with van der Zande less than a second behind him.

“We’re a little disappointed with the final result, given we ran third for almost the entire race,” said team owner Wayne Taylor, whose team was seeking its seventh podium in its last 10 Laguna Seca outings. “It would’ve been nice to finish on the podium but it didn’t happen. What’s more frustrating is that the BoP (Balance of Performance) is still way out of line even with the changes they made before this race. There were two things we asked for, one was weight and one was restrictor. They gave us weight but not the same size restrictor. To the Team Penske guys, congratulations to all of them. But it’s still like we’re racing in a different race.”